1. Closing of Euston Street and Drummond Street at the eastern end.

HS2 plans to close the part of Euston Street between Melton Street and Stephenson Way permanently from 27th July. That will mean that the only way to drive into our area will be from Hampstead Road onto Drummond Street. We managed to get the closure delayed from 2nd July to 27th July because of an assurance the Traders had received from HS2.

We are pressing Transport for London to allow a right turn from Hampstead Road northbound onto Drummond Street, so that people coming to our area do not have to drive in many different loops to get here.

Drummond Street will be closed to vehicles between Melton Street and Cobourg Street, probably from October of this year. 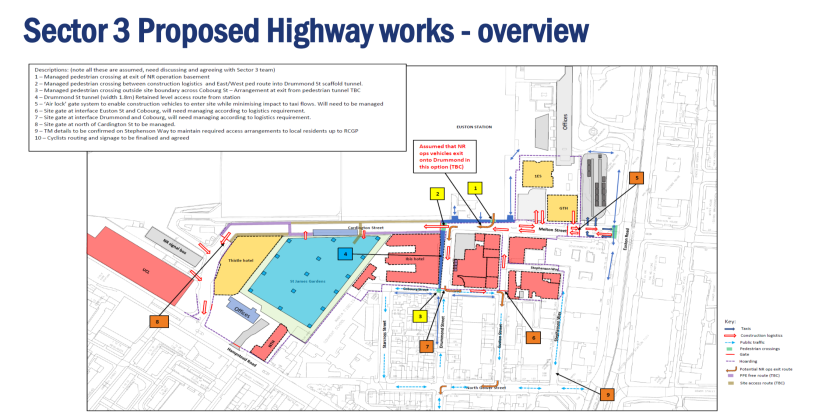 Camden is planning to put trees in planters in the locations shown here – a few on North Gower Street and in George Mews, possibly with one on Drummond Street. We are pressing for them to put many as we can get. Unfortunately they will not even begin to make up for all the trees we are losing.

Camden will at last be allowing us to talk to the architects who are designing the meanwhile uses for the Maria Fidelis school site on Starcross Street and North Gower Street. Those meanwhile uses are for the period from when the school moves out until the end of the HS2 works – probably more than ten years.

View all posts by Site administrator